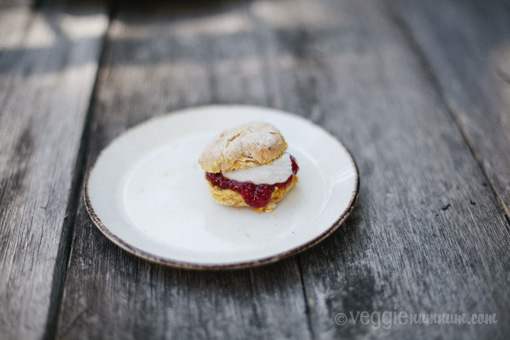 As a kid I doubt I ate a plain scone, in our house they were always pumpkin and always topped with lots of butter and, lots and lots of golden syrup. My Grandma still makes the most amazing pumpkin scones and I still love to eat them whenever we have the chance to visit. Now I like them with a cup of hot tea and maybe a little strawberry jam.

I’ve never been much of a scone maker, as I’ve always left it to the more experienced members of my family. Recently, though, I decide this had to change. I really wanted to have a go at creating a vegan scone, so of course I chose to make them pumpkin.

Using my Grandmas tried and true pumpkin scone recipe I switched out the butter for coconut oil and egg for chia gel. The result is a soft, slightly sweet vegan pumpkin scone, perfect for morning tea when topped with the strawberry chia seed jam and cardamom whipped coconut cream.

Chia seed jam is incredibly simple and so quick to make – use whatever berries are in season and add your preferred sweetener, be it, maple syrup, agave nectar, honey or raw sugar. It takes less than half an hour and you’ve got a whole jar of delicious jam perfect for topping scones, pancakes, bread or a nice warm bowl of porridge.

The coconut whipped cream can be a little tricky to get right – I followed these great instructions on Oh She Glows and after a few attempts, got a result I was happy with. As Angela says, it’s essential to chill your can of full-fat coconut milk overnight and maybe try a few different brands, as some seem to work better than others. If you don’t want to go to the trouble of whipping coconut cream, a little dollop of coconut yoghurt, sweetened with the honey or maple syrup and added cardamom, would also be lovely.

This vegan pumpkin scone recipe is just the thing for scone lovers who avoid both dairy and eggs, or anyone looking for something a little different to serve at a special morning tea, enjoy!

Preheat the oven to 200°C/390°F and line a large baking tray with greaseproof paper.

Add the chia seeds to the 3 tablespoons of water, stir and set aside until they form a gel.

Steam the pumpkin for around 10 minutes until you can just insert a fork into the flesh. It’s important not to over steam the pumpkin, if it’s too soft you scone dough will be too wet. When the pumpkin is cooked transfer onto a plate and mash with the back of a fork, spreading it out in a thin layer and allowing it to cool completely.

Meanwhile beat the coconut oil with the sugar or maple syrup in mixing bowl until it emulsifies (becomes slightly creamy). Add the prepared chia gel, and ground cinnamon and combine. Add in the cooked and cooled pumpkin and mix well.

Sift over 1 cup of the flour working the mixture together with a wide, flat knife. Gradually add the second cup of flour until you have a sticky dough.

Turn the scone dough out onto a lightly floured surface and gently knead into a soft ball. Using a floured rolling pin roll the dough out until around 2cm thick.

Dust the top lightly with flour and using a scone cutter or glass cut out scones. Squash the remaining dough together and roll out once more to cut out the rest of the scones.

Place the scones side-by-side (just touching) on the prepared baking tray. Pop in the hot oven for 10-15 minutes until lightly golden.

Remove from the oven and serve with your favourite scone accompaniments of the following Strawberry Chia Seed Jam and Cardamom Whipped Coconut Cream. 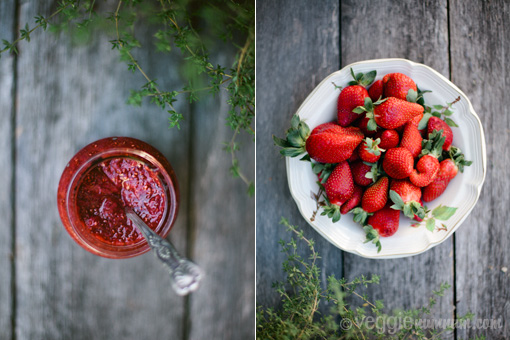 Wash, top and roughly chop the strawberries before adding them to a medium sized saucepan with the maple syrup (or sweetener of your choice). Heat the strawberries over a medium low heat for a few minutes until they begin to soften and release their juices.

Remove from the heat and stir trough the chia seeds. Set aside to cool completely before transferring you chia seed jam to a sterilized jar. Should keep well in the fridge for weeks.

Just before making the whipped coconut cream remove the can of coconut milk from the fridge and flip it over (this allows you to pour off the liquid coconut water easily).

Open the bottom of your can of coconut milk and carefully pour off all the coconut water/liquid (you can save this for use in a smoothie later). In the bottom of the can you should be left with the thick and almost solid coconut cream.

Scoop out the coconut cream into a large bowl. Using electric beaters or in a stand mixer, whip the cream on a high speed for around 5 minutes until it becomes soft and fluffy. Add in the honey or maple syrup, vanilla bean paste and ground cardamom. Whip again until combined.

Serve atop of the vegan pumpkin scones with the strawberry chia seed jam. Any leftovers should keep in the fridge for a few days, simply re-whip before serving. 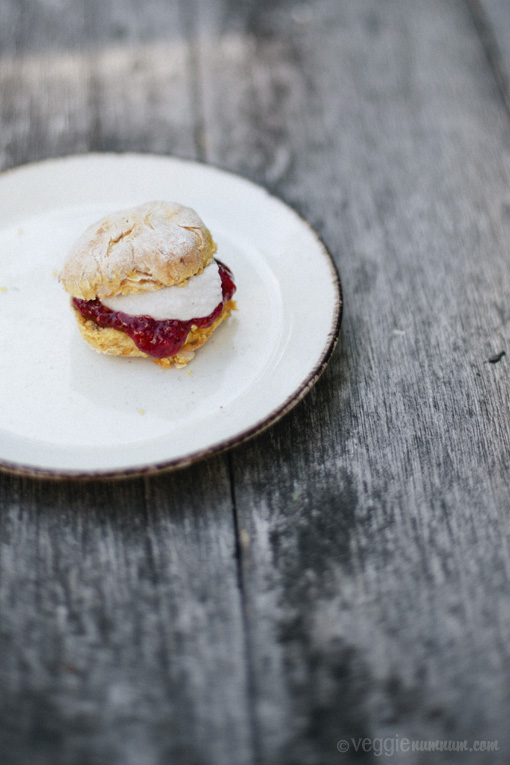