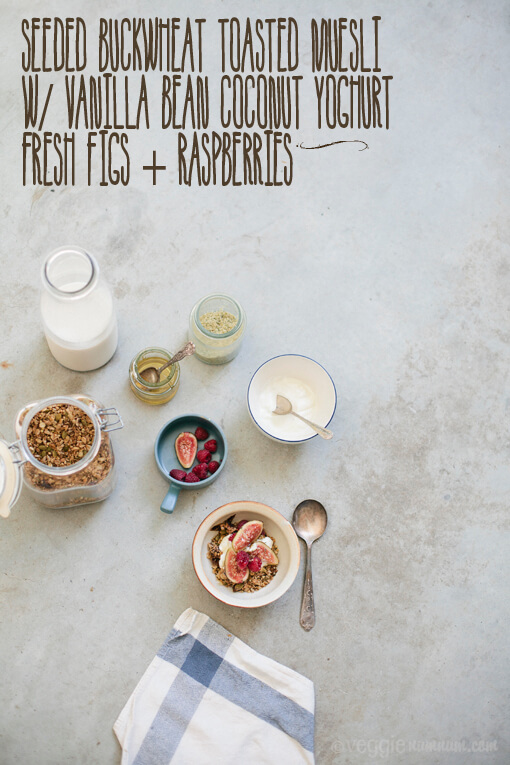 Toasted muesli or granola has to be one of the most delicious and simple ways to enjoy a variety of healthy and nutrient dense grains and seeds. I’ve been making different variations of this toasted muesli recipe for the past year and can’t get enough of it’s crunchy goodness! Super easy to prepare and packed full of vegetarian power foods like buckwheat, linseed, pumpkin and sunflower seeds, plus nutritious oats and whole grain rye – this granola, is one of my favourites.

If you want to create your own version, simply use the recipe as a guide. Switch out the oats and rye for quinoa flakes for a gluten free version or swap the seeds for different nuts and use your favourite dried fruits. Dried blueberries, goji berries, inca berries, sultanas and dried figs are all lovely. For those who enjoy dairy, you can swap the coconut yoghurt for natural tub set yoghurt, if you prefer a non vegan version.

A crunchy, slightly sweet and coco-nutty toasted muesli – perfect for breakfast, snacking or dessert. Try a handful for your morning snack with some fresh cut fruit or use this granola recipe as a topping to stewed fruit for a crumble or over dairy or coconut ice-cream for a nutrient packed dessert. 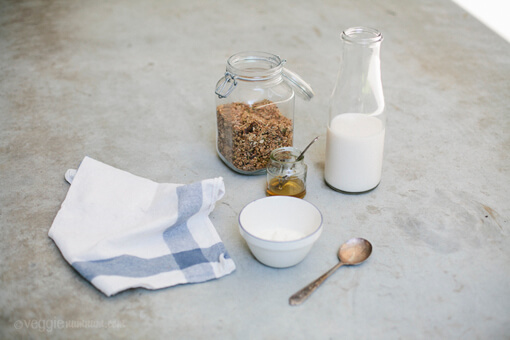 Mix all the dry ingredients together in a large bowl, tossing to combine well. Pour over the maple syrup and coconut oil and toss again until everything is coated with the oil and syrup.

Pour the mixture in an even layer over both the baking trays. Pop in the oven and toast for 15 minutes until golden.

Remove from the oven and allow to cool completely on the trays, before transferring to a sealed jar or container.

The toasted muesli should keep well stored in a large sealed jar for up to two weeks in your pantry. 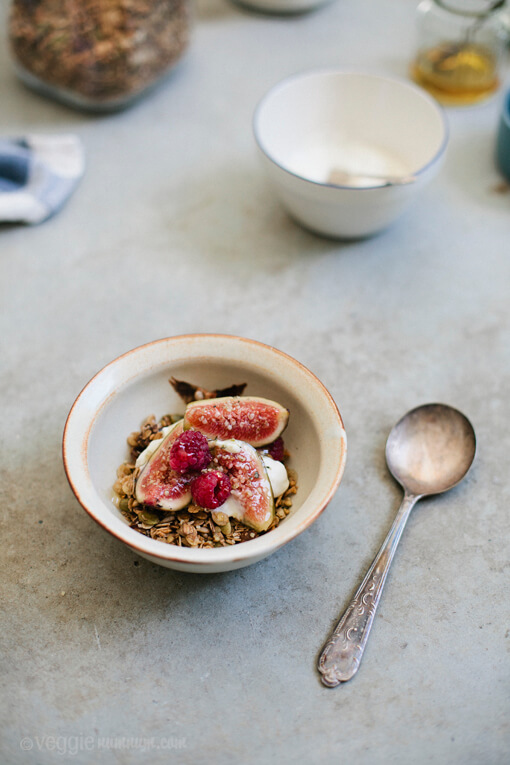 To make the vanilla bean coconut yoghurt, mix the scraped vanilla into the coconut yoghurt – stirring to combine well (any leftover yoghurt will keep for a few days covered in the fridge).

Divide the toasted muesli evenly between four bowls. Top with coconut yoghurt, fresh fruit, a drizzle of maple syrup or honey and good sprinkle of hemp or chia seeds.

Just before eating top with non-dairy milk of your choice.