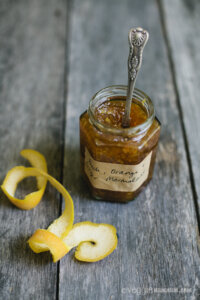 Christmas is fast approaching – the weather’s turned hot and humid, my little girl is singing Christmas Carols everyday and I’ve been in the kitchen preparing a few bits and pieces for homemade gifts for family, friends and teachers. I love this time of year, when so many of us get to enjoy some time off and gather together with the ones we love – it’s the best!!

This beautifully sweet peach marmalade makes good use of our summer peaches, which are available everywhere at the moment. I love preserving and batches of Jam or Marmalade often make their way onto our Christmas giving list. This peach marmalade recipe is easy to make and only takes around an hour from start to finish, a good way to spend a little quite time in the kitchen, with the sweet smell of peaches wafting around.

The orange and ginger balance beautifully with the sweetness of the peaches, making a truly delicious peach marmalade best served on hot toast with a cup of your favourite tea. 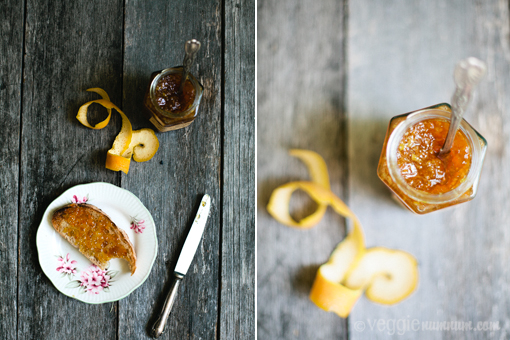 || note: You can sterilizer jars either by boiling for 10 minutes or, as I do, on a hot dishwasher cycle. Just be sure to bottle the marmalade while the jars and marmalade are still piping hot. If you don’t have proper preserving jars (I hardly every use them) simply pop a pieces of plastic wrap under your lid and make sure you fill the bottles all the way to the top so there is no room for air. This will ensure you can store your marmalade in the pantry for the coming months. ||

Peel and stone the peaches and add the flesh to a food processor. Pulse for a few seconds until the fruit is chopped but not a smooth pulp. Transfer to a large, deep heavy-based saucepan.

Next using a vegetable peeler, peel the oranges and peel and roughly chop the ginger. Add the orange peel and chopped ginger to the same food processor and pules until finely diced. Transfer to the pot with the peaches.

Add the sugar. Chop the lemon in half, squeeze in the juice and then throw in the two whole halves of lemon.

Over a medium heat bring the contents of the pot to a boil and stir. Allow to simmer for around 40-45 minutes, stirring occasionally, until the marmalade is thick. Keep a close eye on it and stir often, in the last ten minuets, to ensure it doesn’t stick.

While the marmalade bubbles get your jars sterilizing so they’ll still be hot when the marmalade is ready to bottle (see tip above).

A good trick to tell if your marmalade is ready is to pop a plate in the freezer for a few minutes until cold, spoon a little of the marmalade onto the cold dish and let it sit for a minute. Push your finger through the marmalade and you’ll be able to tell if it’s thick and setting. If the marmalade is still too runny, simply simmer for a little longer and try again.

Once the marmalade is ready, remove the two halves of lemon and very carefully pour spoonful’s into the prepared hot jars (I usually use a soup ladle), being sure to fill them all the way to the top. If you are using jars with metal lids, simply pop a piece of plastic wrap on top before sealing.

Your marmalade should store unopened in the pantry for months. Once opened keep it in the fridge. Makes a beautiful gift for Christmas and a great way to preserve sweet summer peaches. 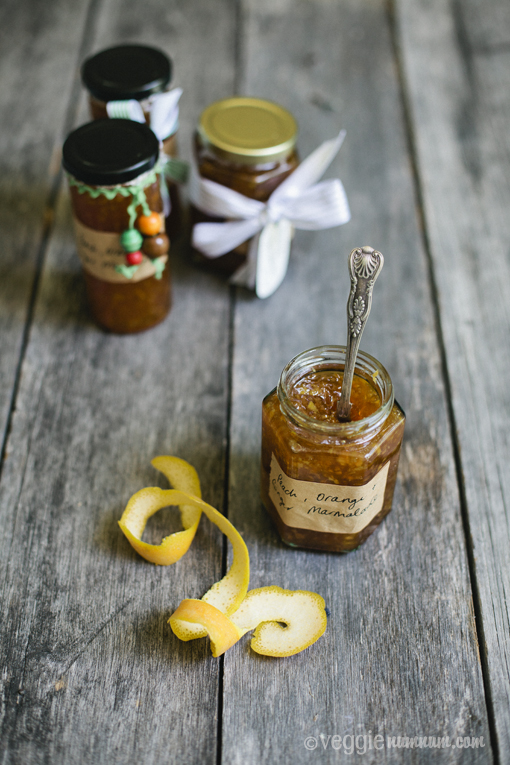 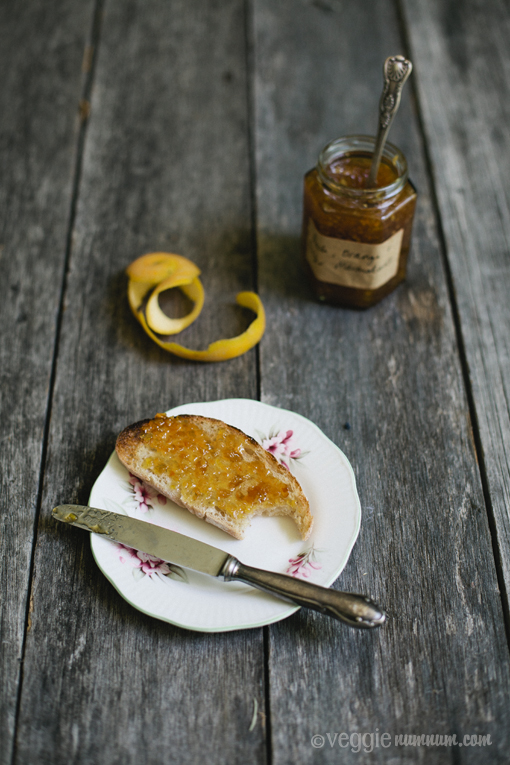