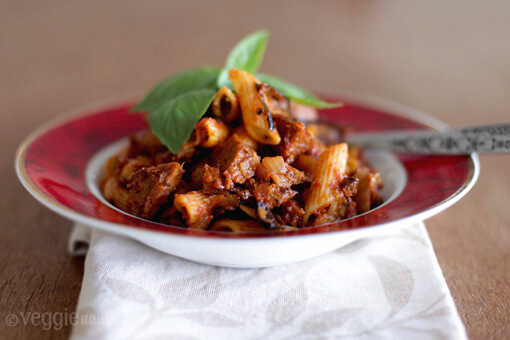 Ever since we started making our own seitan (if you don’t remember it all began with this recipe for sundried tomato and pine nut seitan sausages) we have wanted to incorporate it into some form of vegetarian pasta recipe. Cam loves pasta and I must admit I do enjoy the odd bowl or two and with so many great ways to enjoy pasta we often eat it once a week.

Now we have a new way to enjoy it and so do you 🙂 Although this vegan recipe calls for homemade seitan, which is super easy to make, you can of course cut a little corner and use quality store brought vegetarian sausages if you are short on time. The seitan recipe below is for a super simple seitan ‘bun loaf’ which is then processed into a chunky mince like consistency. The great meaty texture of the seitan works well in this tasty pasta dish which I adapted from an Italian Sausage pasta recipe.

I probably would have made my own passata from scratch too but, unfortunately I couldn’t get a hold of any nice cheap tomatoes locally, so I opted for a bottled passata sauce. By all means make your own if you have access to lovely fresh tomatoes or simply follow the recipe below. With the addition of roasted eggplant (yes he did turn up his nose, grumble), zucchini, garlic and fresh home-grown basil the resulting sauce is rich and super tasty. A great filling and tasty pasta; serve scatted with a little grated dairy or non-dairy cheese or simply as is with a few fresh basil leaves on top omnumnumnummmm

In a spice grinder or mortal & pestle grind the thyme leaves and fennel seeds until fine.

In a large bowl combine the gluten flour with the herbs and spices and a good pinch of salt flakes.

In a separate bowl whisk the olive oil with the stock, tomato paste and harissa if using.

Gradually add the stock and oil mixture to the dry ingredients, folding them together until the mixture forms a thick gooey dough.

Shape the dough into a small bun; place the shaped seitan dough onto a large sheet of foil. Wrap the seitan bun firmly in a couple of layers of foil and seal the edges.

Bake in the pre-heated oven for 55-60 minutes until the seitan is firm to the touch. Remove from the oven and set aside to cool. 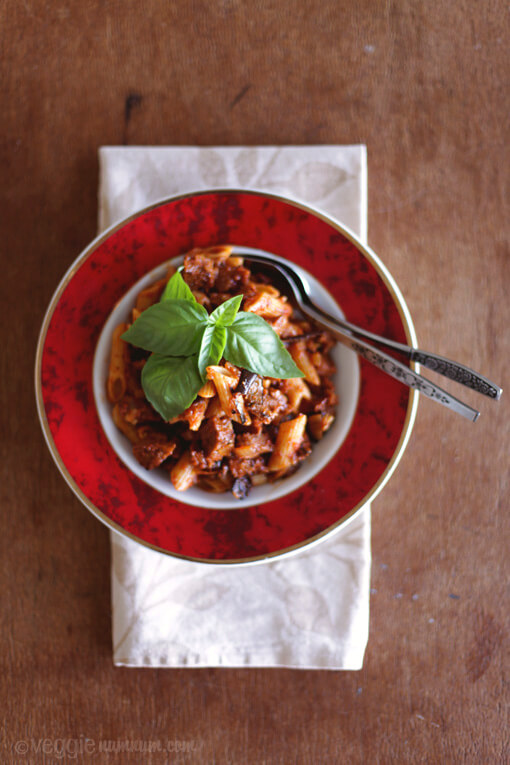 Slice the eggplant and zucchini into 1-2 cm (1/2 inch) thick rounds.

Place the eggplant and zucchini slices onto an oiled baking tray, throw in the whole cloves of garlic (unpeeled) and drizzle over a little extra olive oil.

Bake in the pre-heated oven for 25 minutes until the vegetables are soft and golden/brown. Remove and allow to cool slightly.

In a saucepan fry the onion in a little oil for a few minutes over a medium heat until soft and translucent. Remove the roasted garlic from their skins by gently squeezing into the saucepan; combine with the onion and using the back of a wooden spoon mush the garlic until no big pieces remain.

Add the passata and tomato paste to the saucepan, stirring over a gentle heat allow the sauce to just simmer for 5 minutes or so, season with salt and pepper and add about half the fresh basil leaves.

Meanwhile prepare the penne according to the packet instructions in plenty of rapidly boiling water, strain well and set aside.

Roughly chop the prepared seitan or store brought vegetarian sausages and then by hand or in a food processor mince until it resembles a chunky bread crumb/mince like consistency.

In a large frying pan cook the seitan mixture over a medium heat until it begins to crisp and golden, approximately 5 minutes. Add the roasted eggplant and zucchini, again using the back of a wooden spoon to gently break up the roasted vegetables.

Add the prepared pasta sauce and mix through the seitan and vegetable mixture until it forms a rich chunky sauce. Toss through more fresh torn basil and then the cooked penne.

Toss until the pasta is heat through and well combined. Serve with a little grated non-dairy or dairy cheese or simply topped with a little more fresh basil, enjoy! 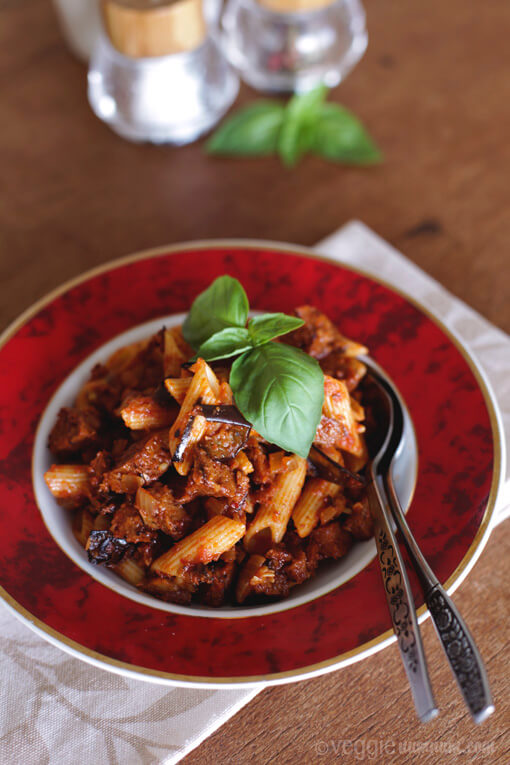